February 25, 2008
I saw the following reported on Barron's Tech Trader blog today:
"Bookings for North American semiconductor equipment companies in January totaled 1.12 billion in January, down 2.8% sequentially from December, according to SEMI, the industry trade group. The book-to-bill ratio for the month was 0.89, indicating shipments exceeded bookings. A ratio above 1 is typically considered bullish."
In following the link in the Tech Trader post and exploring the SEMI web site I came across a download of historical book-to-bill data. The following charts illustrate the situation in the semiconductor equipment sector. It's not pretty.

In this first chart, we see the book-to-bill ratio has been hitting lower highs for years and hasn't made a significant move above 1.0 since June of 2006. 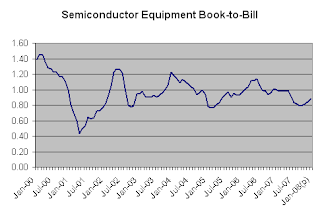 In the second chart, we see that both billings and bookings have been declining since June 2007. The dollar value of billings (ie: revenues) have dropped 28% since the most recent peak in June 2007. Bookings (ie: new orders) have fallen over 31% since their most recent high point in May 2007. 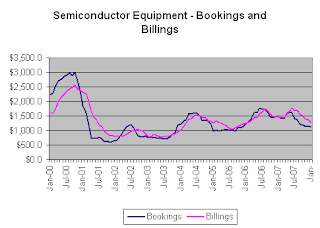 Applied Materials (AMAT) is the biggest semi equipment manufacturer and a bellwether for the industry. They just reported earnings that were a penny less than analysts expected but with higher than expected revenues. How did they manage to do it? The company operates in several business areas: semiconductor capital equipment is the primary business with flat-panel hardware and thin-film solar cells being newer segments. These are two hot areas and AMAT benefited from a rebound from cyclical weakness in flat panels, while its solar business is just beginning to take off. AMAT, due to their size, has been able to ramp up operations in these new segments to offset the less than stellar growth and margins they are seeing in their traditional semiconductor capital equipment business.

KLA-Tencor (KLAC) is the second-largest semi equipment manufacturer in the U.S. and is also a bellwether for the industry. They have not done as well as AMAT. With memory prices declining, there is reduced demand to add more memory manufacturing capacity and that is seen as hurting KLAC. Despite beating analyst expectations for the previous quarter, they announced that orders are expected to be down 10% in the current quarter.

LAM Research (LRCX) is next on the list of U.S. manufacturers. Though also delivering good numbers for the past quarter, they were very cautious on their earnings conference call. Management pointed out that "profitability issues in the semiconductor industry will limit the rate of additional capacity expansion until IC unit supply and demand is brought back in the balance." They point to DRAM as being weak until at least the second half of the year. They expect NAND capacity investment to be flat (though at last year's higher level) and expect wafer fab spending to decline in 2008. In the near term they expect shipments to be flat to up 5% and margins down slightly.

These three companies, chosen based on their large market cap relative to other players in the industry, do not paint a picture of an industry on the upswing. Each is pointing to some problem in their operating environment and only AMAT has managed to offset weakness in one segment with strength in another.

The book-to-bill ratio has been contracting for several years. It seems to have found a floor at around 0.8 but it has exhibited a pattern of lower highs. This weakness in book-to-bill implies that new orders are in general lagging actual shipments. The new order pipeline is not as full as it could be. Broadly speaking, then, the semiconductor equipment business is not showing much growth.

This is further borne out when looking at the actual dollar value of equipment shipments and new orders. There has been a significant drop-off in both measures since the previous peak.

It is a given that the technology industry has become more cyclical. In looking at the charts above it is clear that there are well-defined peaks and valleys. It appears, however, that this time the decline is beyond a normal seasonal or cyclical slowdown. Whereas there has been a nice up-trend in billings in place since the lowest point way back in October 2001, it appears that the recent lows have now broken below that trend line. Company management is consistent in pointing to difficulties ahead. Investors would be wise to exercise caution when approaching this sector.

Disclosure: author owns no shares of AMAT, KLAC or LRCX