February 06, 2008
Markets have gyrated this year, but overall the outcome has been a significant move lower. The major averages are down double digits from their 2007 peaks and are currently located somewhere between correction and bear market territory.

Investors are in a quandary. Is it a recession or not? Are stocks cheap or not? Have we seen the bottom yet? Can we call a bottom back on January 22? If we are near the bottom, shouldn't we all be buying stocks like crazy?

Merrill Lynch has assembled several indicators to help determine when it is advisable to get in or get out of the markets or at least overweight or underweight equities.

Yes, it is an acknowledgement that there are investors who are interested in market timing. Market timing is a concept that always leads to controversy but many of us try to do it anyway so I believe it is worthwhile to present Merrill's indicators and discuss their current opinion on the state of market sentiment.

As things currently stand in the market, every time we have a big down day such as yesterday's 370 point plunge on the Dow, we hear from those who say pessimism has finally reached an extreme and we have seen the capitulation needed to enable us to begin the next bull market phase.

Plainly stated, Merrill doesn't think we are there yet.

Merrill feels that the strongest bull markets do indeed start from a level of extreme pessimism. Merrill looks at a few indicators to gauge the level of sentiment at work in the market.

The Sell Side Indicator --

Merrill has devised a contrary indicator based on the consensus equity allocations being publicized by Wall Street firms. Here is their current take:
"The latest reading of the indicator (January 31) is 60.4%, which is down from the previous month's 61.2%. Any reading at or above 63.8% generates a "sell" signal, whereas any reading at or below 51.5% generates a "buy" signal. Thus, the indicator remains in "neutral" territory this month.

The indicator has fallen significantly during the past six months or so, which indicates that investors are indeed becoming more conservative or bearish. However, when the recent readings are put in historical context, one can see that investors remain relatively bullish and risk-oriented.

The next chart shows the readings of the Sell Side Indicator within the context of Wall Street's typical "normal" equity allocation of 60% to 65%. Although the recommended equity allocation has decreased (which indicates increased pessimism), we find it hard to argue that there is extreme pessimism when Wall Street is not even recommending an underweight of equities." 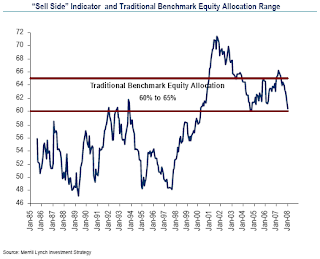 I find it ironic that Merrill has a contrary indicator based on the advice of the same group of firms of which Merrill is a member. Nevertheless, it is good to see that they have an open mind.

One of the prime tenets of investing is that one should pay a premium for safety and demand compensation for taking risk. One would expect, therefore, that a lower-beta group of stocks would generally sell at premium valuations to a higher-beta group. Merrill looks at the current prices of the highest beta and lowest beta stocks in the S&P 500 and sees that valuation of high beta stocks are still above those of low beta stocks.

Merrill's comment on this situation is as follows:
"It is hard for us to consider investors terribly risk averse when they are still paying premium valuations for riskier stocks."
Debt Spreads --

High yield spreads are indeed moving up sharply but they are only about half-way to where they were during 1990 and 2001. This would not be so significant if Merrill didn't feel that the current situation bears a lot of similarity to the 1989/1990's cycle and that things today may actually be worse.

With respect to emerging market debt spreads, the situation is more difficult to analyze. Emerging market sovereign balance sheets have become much stronger than in the past so one would not expect spreads to reach the extremes that were seen during the dislocations that occurred in years past. Nevertheless, in this case too, spreads are rising but are not yet signaling any kind of extreme pessimism.

Merrill's work with these indicators shows that investors have not yet become risk averse to the point where a market bottom can be declared. Indeed, the author of the study feels that investors have not over-reacted to the market's credit woes at all. Though he sees pessimism increasing, he thinks we are only half-way to the levels that are typically seen at significant market troughs.

In terms of market timing, all this leads one to believe that we have more bottoms to test before a convincing rally begins. Merrill advises being defensive. For the time being, I will be holding on to my positions in the ProShares ultra-short ETFs SDS, SKF, REW and FXP.