Inside Alert HQ - how we generate signals

February 01, 2008
For those who are interested in the details of how the TradeRadar Alert HQ software generates its lists of picks, this post will try to explain it in a way that is easily understandable by all.

The proprietary TradeRadar signal analyzes price data to determine if a stock has reached a minimum price level and has then started a move upward that is significant enough to be considered a BUY signal. The mathematical properties of the TradeRadar approach cause a spike to be displayed on a chart if the signal is strong enough. For a SELL signal, things work just the opposite: a peak price level is looked for and falling prices may then cause the signal to be generated.

The software checks the strength of the signal and also determines if it is a clear signal. The signal strength is a very important indicator of whether the signal is significant or not. The Signal-to-Noise ratio is calculated to measure how sloppy or well-formed the signal looks. Both of these measurements are presented in percent for easy readability.

Because the software generates a spike on a chart, it is useful to measure how narrow the spike is. A narrow spike is a more definitive signal. A statistical technique called Kurtosis is used to measure narrowness.

The spike generated by the TradeRadar software is the indicator that shows we have a potential BUY or SELL signal. The software not only measures how high the spike goes but also whether it falls below a certain level as the shape of the spike is formed. This is referred to as the measurement of the trailing edge. When the spike falls below that level, the signal is said to be "in the zone"; either the BUY zone or the SELL zone. The signal may remain "in the zone" until the next change in trend occurs.

At this point, an example would be useful. Below is a chart of Apple (AAPL). 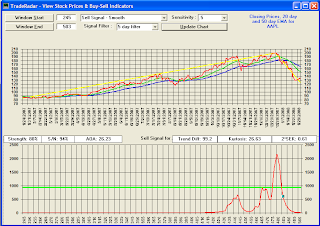 The software generates trend lines. As many investors know, when a trend changes direction, it is considered a reversal. In other words, when an up-trend turns into a down-trend, we have a reversal and a corresponding SELL signal. Conversely, when a down-trend turns into an up-trend we have a reversal that corresponds to a BUY signal. The TradeRadar software calculates trend lines and determines how steep the trends are and in what direction the trends are moving. This is an important part of the overall alert definition. The software requires that the trend lines meet certain criteria for steepness. How a new up-trend differs from the original down-trend, for example, is an important measurement as well as how steep from the horizontal the new trend is. In other words, for a BUY signal, we like a trend that is moving up quickly and steeply.

Alert HQ uses daily price data to generate the TradeRadar charts and signals. Alert HQ provides signals on a weekly basis. As a result, it needs to verify that the signal fell "into the zone" within the last week. Specifically, the software checks to verify that the signal fell at least 20% "into the zone." This ensures that the move is reasonably significant.

There are many stocks that remain in the zone for weeks or months at a time. Each week Alert HQ identifies only those stocks that have fallen "into the zone" during the most recent one week time period.

Alert HQ is intended to provide an early warning of stocks that are reversing their trends. I hope this post has been able to shed some light on the methods we use to generate our lists of alerts. Knowing what goes into generating a signal will, I hope, reassure you about our methods and encourage you to try one of our lists. They can purchased each week at TradeRadar Alert HQ. And there is no requirement to subscribe.

For more posts on the TradeRadar software and Alert HQ, check the "Categories" section of this blog in the right sidebar.