February 28, 2008
In tinkering with my Alert HQ software, I came across Allis-Chalmers Energy (ALY). The stock has been on a straight path downward since last July but is now starting to rally. It exhibits the characteristics that make the software identify the company as a BUY. 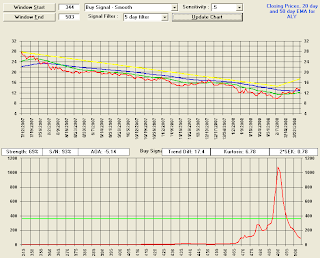 The following is from the company's web site:
"Allis-Chalmers Energy Inc., is a Houston based multi-faceted oilfield services company. We provide services and equipment to oil and natural gas exploration and production companies, domestically in Texas, Louisiana, New Mexico, Colorado, Oklahoma, Mississippi, Utah, Wyoming, Arkansas, Alabama, West Virginia, offshore in the Gulf of Mexico, and internationally primarily in Argentina and Mexico.

The Company operates in six sectors of the oil and natural gas service industry: rental tools; international drilling; directional drilling services; casing and tubing services; compressed air drilling services; international drilling; and production services. Providing high-quality, technologically advanced services and equipment is central to our operating strategy. As a result of our commitment to customer service, we have developed strong relationships with many of the leading oil and natural gas companies, including both independents and majors."
The company has about a $470 million market cap and a PEG ratio of only .61 (well under 1, suggesting the stock is not over-priced). The company is solidly profitable with a PE of 7.85 and earnings per share last year of $1.71 on revenue of $538 million.

Merger with Bronco Drilling
On January 24 Allis-Chalmers announced that they entered into a definitive merger agreement providing for the acquisition of Bronco Drilling Company, currently trading on the NASDAQ under the symbol BRNC.

One of the prime benefits of this merger from the point of view of ALY is that it expands their geographic footprint in domestic markets and internationally by increasing its presence in North Africa (specifically Libya) and in more Latin American markets. It is expected to facilitate relocation of newly acquired and certain underutilized drilling and workover rigs of Bronco Drilling to Latin America and North African markets and start deriving revenue from these assets.

The combination further serves to broaden the service and equipment capabilities of both companies resulting in a fully-integrated oilfield service company with diversified business lines and substantial international exposure.

Financially, management contends that the combined balance sheet will remain sound, allowing for future organic growth and strategic acquisitions. The merger is expected to be strongly accretive to earnings per share of Allis-Chalmers.
Brazilian Investment
Allis-Chalmers also announced that it has entered into an agreement with BCH Ltd., (BCH), to invest $40 million in BCH in the form of a 15% Convertible Subordinated Secured debenture. The debenture is convertible, at any time, at the option of Allis-Chalmers into 49% of the common equity of BCH. At the end of two years, Allis-Chalmers has the option to acquire the remaining 51% of BCH from its parent, BrazAlta Resources Corp., ("BrazAlta"). BrazAlta is a publicly traded Canadian-based international oil and gas corporation with operations in Brazil, Northern Ireland, and Canada (TSX.V:BRX).

BCH has contracts with Petroleo Brasileiro S.A., ("Petrobras") and its partners and with BrazAlta. Allis-Chalmers expects that these contracts have the potential to generate revenues of approximately $125 million to BCH over the next three years. This agreement has the potential to expand ALY's reach further in Latin America by getting the company into the Brazilian market.
Preliminary 2007 Earnings Results
Allis-Chalmers announced that for the full year 2007 it expects to report revenues of $574 million, operating income of $125 million and net income of approximately $50.3 million, or $1.45 per fully diluted share. Considering 2006 revenue was $307.3 million, this is a huge increase in revenue. Likewise, 2006 operating income and earnings per share in 2006 were $66.7 million and $35.6 million, respectively. On an annual basis, the company is looking good.

The company recently provided guidance and it looks like it is starting to get back on track.

With the company's stock price beaten down to the low teens, this could be a low-risk time to begin to build a position. Oil may or may not spike to $120 a barrel but it is clear it is not going to plunge in price any time soon. A company like Allis-Chalmers can expect business to remain robust. With the recent rally in the shares, there are apparently other investors who agree.

This Blog is really nice and helpful. We hope our post will be useful for all visitors of this prestigious blog.

On 29th Feb 2008 budget was declared. It was expected to be in favor of middle class people . As in budget all loan of farmers were waived off, its a
Positive news for farmer which can give rise to agro based industries too.

Overall budget was good for everyone.

Now with time USA is coming out of the jinx of sub prime and recession and we have already witnessed some good movement in US market too. Recent fall in Indian stock market was due to Overbought Nifty, USA recession margin pressure and panic.


Few stocks for delivery are:-


Please note above stocks are for MEDIUM term delivery.

Please feel free to contact us at sharetipsinfo_1@yahoo.com for further details