September 26, 2007
Today I decided it was time to climb on board the tech stock bandwagon. Accordingly, I bought the ProShares Ultra Technology ETF (ROM).

I have been a schizophrenic investor for a while now. I have recommended a number of tech stocks in the TradeRadar model portfolio: Cisco, Qualcomm, BigBand; recently I sold SanDisk and Millicom Cellular. All the while I have also been maintaining a position in the Proshares UltraShort QQQ ETF (QID), which essentially comprises a bet against the tech-heavy NASDAQ 100. I picked up QID when the TradeRadar software generated a SELL signal on the QQQQ earlier this year and I have a hard time figuring out if I'm keeping it as a hedge or I'm just reluctant to take a loss. Maybe that's a discussion for a post on investor psychology.

In an case, I am tilting much more toward being bullish on tech now due to several developments including the action in the markets as reflected in the TradeRadar software and the fact that underlying fundamentals for tech look pretty good right now.

The TradeRadar Signals are positive

In looking at the charts, it can be seen that tech stocks haven't fallen as far as the broader market during the most recent downturn and they have speedily recovered their losses and moved on to new highs. The QQQQ and the SPDR Technology ETF (XLK) have all shot up out of the TradeRadar SELL zone. With the July/August market swoon, both had generated TradeRadar SELL signals. Those signals have now been reversed. For XLK, the reversal was just a couple of days ago. You can see in the image below how the red line on the lower half of the chart forms a peak, drops back down below the green horizontal line and then moves up above the green horizontal line again. The peak was the SELL signal. Crossing the green line again in the upward direction indicates a reversal of the SELL signal. 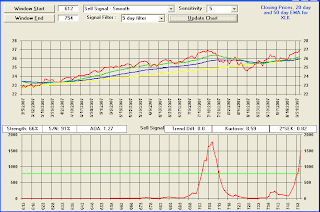 With the economy shaky and the Fed feeling the need to cut rates, there are a number of sectors in the US stock market that are feeling some pain. Tech stocks seem to have shrugged off the economic worries and marched higher. It's no accident. International growth is the driver that is propping up technology. Just as we have seen energy and materials markets driven higher by demand from China, India and other emerging markets, the potential exists for the same thing to happen to technology. We are already seeing it in the earnings reports of the larger companies who are reporting strong growth overseas and modest growth in the US. In addition, tech is less vulnerable to the sub-prime mess and the credit crunch. Interest rates are less of a concern since tech stocks tend not to carry excessive amounts of debt.

Tech bell-weathers like Cisco, Apple, IBM, Oracle and Research in Motion are putting up good numbers. Not only were trailing earnings good, the companies also provided forward guidance that was positive. As third quarter earnings season approaches, expectations are high for continued profit growth.

Valuations of tech stocks are also reasonable at current levels. Tech stock PEs tend to be high and now is no exception; however, the stocks are nowhere near the nosebleed levels of the late 1990's and 2000. Though there still seems to be plenty of VC money being thrown at wacky tech start-ups (I read TechCrunch and shake my head sometimes), today most of the tech stocks that are gathering attention and making new highs are companies that are actually executing well against solid business plans.

There are other reasons to be bullish on tech stocks: video is eating up bandwidth, the world is going wireless, businesses everywhere want to increase productivity via technology, the web is enjoying a resurgence, there are new gadgets coming to market and generating buzz, the list goes on.

So I am clearly overweight tech at this point and, though I would rather buy on a pullback, I'm reluctantly buying even as we are hitting highs.