Motorola - too much doubt to follow the buy signal

September 25, 2007
Today on 24/7 Wall Street, a post titled "A Motorola (MOT) Rally" cast doubt on the stock's recent advance and questioned positive analyst comments. The post is brief so I will quote it in its entirety:
"Motorola's (MOT) shares are up almost 10% since late last month. RBS recently upgraded the shares due to a strengthening handset market and improved products, according to Barron's. Cowen upgraded the stock last week.

Most of the improvement in the share price is based on two theories.

The first is that the overall demand for handsets is rising. But, Motorola may be getting no benefit from this, Its market share dropped from a high of 22% over a year ago to a current level of under 15%. Samsung and Sony Ericsson have taken a great deal of that business. And, Nokia's (NOK) piece of the market is still growing, approaching 40%.

Even in a rising market, MOT's market share may be continuing to fall.

The second line of thinking is that new models will replace the dying RAZR and help draw new customers. It may be a worthy theory, but that is all it is. Motorola has not proven that it can launch another wildly popular model.

Some analysts may be right. Motorola may have worked its way through an inventory backlog, which would be good news. But, it is not a sign of sustained recovery."
The chart is looking good...

Based solely on the stock chart, Motorola had actually flashed the TradeRadar BUY signal back on September 10. Normally, I would announce it on the blog as the TradeRadar Pick 'o the Month. 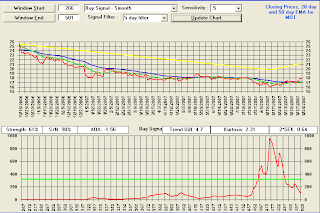 Unfortunately, I find that I cannot get by the issues raised by the post above. Indeed, at the end of August I wrote a post questioning the upgrade by an analyst at Lehman Bros. At that time Motorola did not expect its mobile operation to be profitable in 2007. Also in that post I described how Motorola had not cracked the low-end handset market, where so much of the action is in emerging markets, and lacked a significant entry in the high-end market.

A couple of weeks ago Motorola reported they were cutting R&D spending in a bid to reduce expenses. It is hard to see how they will roll out new products with the potential impact of the original RAZR under this scenario.

Just today, Morgan Stanley came out with bullish views on the handset market and singled out several component makers as well as Nokia as companies well positioned to benefit. Notable by its absence was Motorola.

So the TradeRadar BUY signal has been flashed and the stock remains in the BUY zone. Still, it is always necessary to apply human oversight to any signal generated by an automated system, including (or especially!) TradeRadar. That is why, at the risk of going against the tape and for all the reasons given above, I can't recommend Motorola at this time.