September 05, 2007
The latest Census Bureau monthly report on construction spending shows two trends moving in opposite directions. It is no surprise to see single-family residential construction spending going down month after month. Yet it is somewhat of a surprise to see spending for office, lodging, shopping centers, shopping malls and multi-family dwellings holding reasonably steady or in some cases even showing modest increases (see chart below). 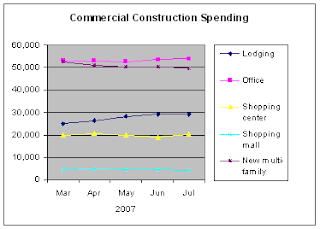 The continued strength in the commercial sector despite the general real estate malaise and the recent fall-off in deal-making implies developers are making a huge bet on strength in the economy making all this new commercial property profitable.

In contrast to the positive attitude exhibited by the commercial real estate developers, Bloomberg reported the following items today:

"Prices of U.S. commercial real estate could fall up to 15% in what would be the worst decline since the 2001 recession"

"In July, investors bought the fewest commercial properties in almost a year and apartment building purchases were down 50% from June."

"Last month, the Archstone-Smith Trust postponed its $13.5 billion sale to a group led by Tishman Speyer Properties until October."

"There are so many deals falling apart," said David Lichtenstein, CEO of commercial property owner Lightstone Group. "People who can get out are getting out."

Bloomberg's news shows that the liquidity and credit problems affecting other segments of the market are beginning to take their toll on commercial real estate. The cheap funding that fueled the leveraged buyouts of REITs and allowed the private equity firms the ability to immediately sell off at high prices parts of their holdings is drying up. Blackstone's purchase of Sam Zell's Equity Office Properties last year could probably not be done now. Subsequent to the purchase, Blackstone was able to recoup a large part of their investment by quickly selling various properties. These deals also would have trouble being done in today's environment.

Given the long lead times of major construction projects, it is understandable that developers who committed to projects earlier in the year now find themselves in a tough situation. Once building has started, it is hard to walk away without taking a major loss. If the Bloomberg reports prove accurate, though, some of these properties may be worth less when they are completed than it cost to build them.

Those commercial real estate developers still building aggressively could soon be facing the kind of downturn now being experienced by the homebuilders: declining prices, lack of buyers, stock prices in free-fall.

Those REITs that own commercial real estate developers will undoubtedly feel the pain also. And the ETFs that invest in REITs will, in turn, suffer as well. This analysis confirms our decision to continue to hold the PowerShares UltraShort Real Estate ETF (SRS) in our model portfolio.