Hello down there! Is there a bottom in sight yet?

August 07, 2011
Last week I looked at the Trending Analysis chart (I have the updated version below) and said there was further room for stocks to fall before the next rally could begin. Even though I expected a further pullback, I was wholly unprepared for what actually happened: the market fell with a vengeance.

Looking at the S&P 500, for example, it took out the trendline extending all the way back to March of 2009, blew threw the lower support at the bottom of a 6-month consolidation pattern (those who are more pessimistic are saying this was the neckline of a head-and-shoulders), and to put the icing on the cake, dropped decisively below the 200-day moving average. Many of the other indices look pretty much the same.

The moving average and trending analysis charts I often present on the weekend certainly reflect the damage. Let's see what they say this week. 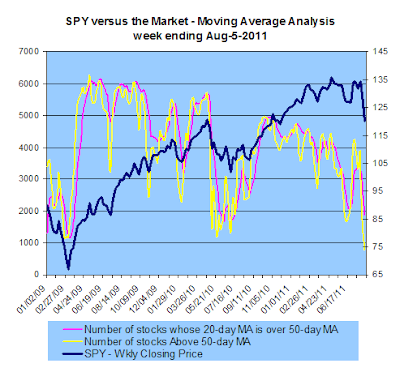 The yellow line on the chart above shows that the number of stocks above their 50-day exponential moving average has dropped to a lower level than during the March 2009 lows. Now that is an extreme! In addition, it is an extreme that suggests investors are totally bearish on both the economy and stocks and are throwing in the towel.

I keep thinking it's good sign when the yellow line on the chart crosses above the magenta line and a bad sign when the yellow line crosses below the magenta. You can see that for SPY, at least, there hasn't been a sustained move of that sort in over a year. As soon as stocks move up, weakness hits again. Indeed, the fact that the number of stocks above their 50-day EMA has set a series of lower highs all year long should, in retrospect, have been looked at as a warning signal for a week like this one. 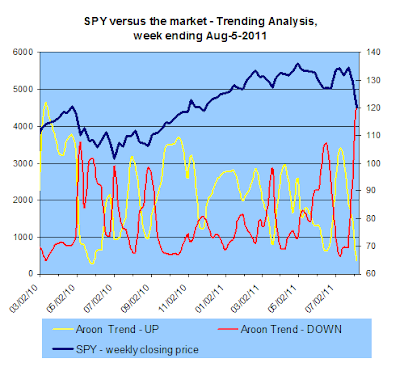 This chart is another study in extremes. Though the time scale doesn't go all the way back to March 2009, I can tell you that the number of stocks in up-trends (yellow line) now is as low as it was back then. The number of stocks in down-trends (red line) hasn't quite reached the level we saw in 2009 but it's pretty close.

Well, it certainly looks like bears are ascendant. And they have their reasons: lackluster ISM, GDP and employment reports in the U.S., emerging markets raising rates to fight inflation, Europe struggling with sovereign debt, etc. All that could definitely be reason enough to lighten up on stocks. But to this extent?

Bears have pushed stocks to extremes last seen when the global financial system was melting down and a horrific once in a generation recession had taken hold. Though stock prices are not yet as low as they were in 2009, market breadth and internals are equally bad.

Here, however, is where I have to point out that the economy is nowhere near as bad today as it was back in 2009. To me, it calls into question how long this extreme situation can last.

As painful as it may seem, the employment situation is oh-so-slowly improving. Retail sales have not stalled out. The aforementioned ISM reports have been soft but still show (just barely) that expansion is still taking place. Manufacturers are still hiring even though the last couple of Durable Goods reports were not especially inspiring. In 2009, all these indicators were still in free fall; now they are at least on an upward path.

In any case, at least some investors are looking at the glass as half full. At the close on Friday, the NASDAQ 100 (and its associated ETF, the QQQ) managed to close just above the bottom line of its consolidation pattern. This is pretty much the only index that managed to salvage some shred of support last week though it must be said that stocks did fight back from deeper lows on Friday. So with the NASDAQ 100 hanging on by a thread, it could be said that large cap tech appears to be one of the stronger market sectors. Since tech is often a leader coming out of downturns, this is one small sign of hope for this market.

On the other hand, I am writing this on Sunday night and the Nikkei is down 1.39% and the Hang Seng is down 2.37%. If that negativity makes its ways to Monday's session in the U.S. (our futures at this time show further declines in store on the order of 1.5%) we could see the other shoe drop and take the QQQ down with everything else.

The bottom line here is that charts are a mess and the economy is less than inspiring. Seems like a good time to be out of the market, right? But I can't help thinking the charts above suggest stocks can't stay at these levels for long. When the rally comes, it will probably be as surprising as this past week's decline. I hope you all have a good watch list of stocks you would like to pick up at discount. It seems stocks will be even cheaper over the next few days.