Despite beating expectations, July Durable Goods report has me worried

August 25, 2011
The Durable Goods advanced report for July was released on Wednesday and the headline number surprised to the upside. This helped the market tack on some further gains beyond Tuesday's big advance.

Besides its effect on a day's action in the stock market, the Durable Goods report is useful for seeing how tech in aggregate is performing. As of this report, the situation is mixed. I always focus on two particular measures: shipments and new orders. In July, the two measures were not consistent and this is worrisome. Let's see how it played out in July.

I generally give less importance to Shipments since this is a backward looking measure reflecting orders that have been confirmed, manufactured and shipped. It's similar to earnings reports -- it's good to know but the data is in the past and we're more interested in the future. The following chart shows how July shipments looked for the overall tech sector: 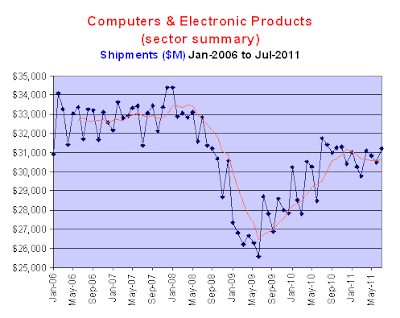 Results were actually quite good and, to make things even better, the previous two months were revised upward. This indicates that the fears of a "slow patch" in July were overblown.

This is the category that gets the most attention as it provides a glimpse of what might unfold in the future. Looking at the sector summary we see that there was actually a significant drop in new orders. 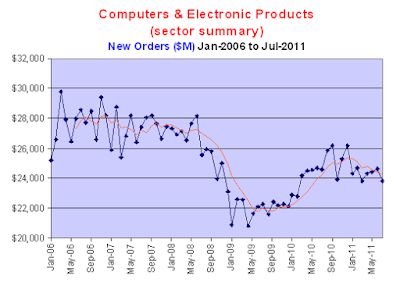 This is not a good thing. Note how new orders have fallen roughly to levels last seen back in March. Note also that the trend is decidedly not up.

Shipments in the tech sector have continued to show strength through July. This is good but the question is always whether that kind of performance can continue.

New orders are one of the better indicators we have to forecast future shipments and the level of business activity in an industry or sector. July's dismal result suggests that weakness in tech is indeed impending.

As economists and analysts reduce their estimates of GDP growth, it appears that tech is firmly in the same boat. Optimists will point out that seasonality is due to come into play and  provide support for the tech sector. As the economy in general struggles, though, it becomes harder to believe that tech can escape the downward pull of a slowing economy and cautious consumer.

Besides Apple, which tends to be a special case these days, can other tech companies prosper in this environment? It looks like it's going to be a tough row to hoe for most other companies in the tech sector.