A turn in the bond market? Six reasons to avoid TLT

June 14, 2011
Bonds got clobbered today, going in the opposite direction as stocks.

I've been watching the iShares Barclay's 20+ Year Bond Fund (TLT) for a while and wondering if the rally was getting tired. Today's action suggests TLT is really pooped and that perhaps the rally is over for now. Let's go through the chart: 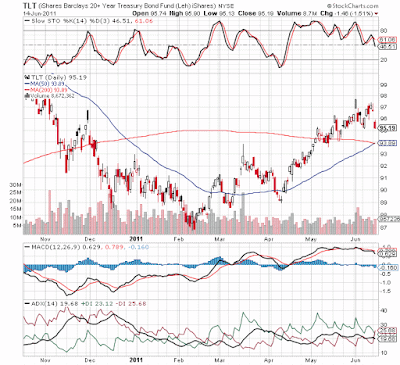 Here are six reasons that suggest the rally may have run its course:
So from a technical point of view, it appears that  the steep up-trend has been interrupted. The indicators discussed above suggest there is further downside.

From a fundamental perspective has anything changed? No nothing has changed except, perhaps, perceptions. Investors may have changed their attitudes about the following:
Some might say that we simply saw another simple Risk On/Risk Off knee-jerk reaction today like we have seen so often during the last year where stocks rally and bonds falter and vice versa. On the other hand, there are signs that maybe something more is at work here.