A sinking market has to hit bottom sometime -- will it be soon?

June 12, 2011
It's been roughly six months since I've done one of these weekly market analysis posts but with stocks grinding lower for six straight weeks I thought this would be a good time to pull out the charts and see where we stand.

For those readers who are new to TradeRadar or who don't remember what this is all about (and I don't blame you if you've forgotten), the data for the following charts is generated from our weekly Alert HQ process. We scan roughly 6200 stocks and ETFs each weekend and gather the statistics presented below. 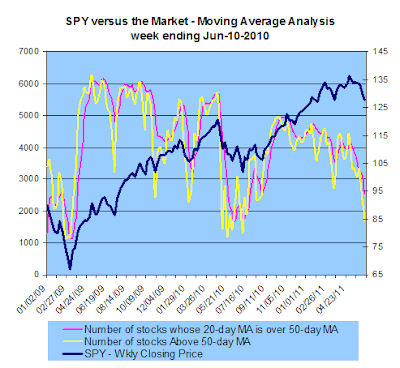 This chart makes it clear we are reaching the extremes of last May and June. One could say that our "summer swoon" is right on schedule. Notice, however, that during the last sell-off, while our moving average indicators began hitting their extreme lows in May, SPY didn't bottom out until over a month later.

In the current situation, we are just barely approaching what might turn out to be a low for this downturn. If things proceed as they did last summer, we will likely need to work through a bottoming process before the market can move solidly higher again. That means several weeks of choppiness before the up-trend resumes. 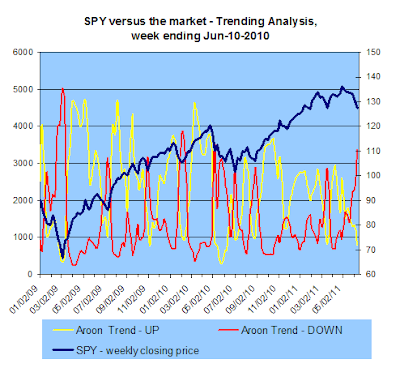 Here, too, we see the chart reaching extremes. Though this is a messy looking chart, there is some interesting data hidden in there. For example, for the last year or so, the Aroon data has oscillated between roughly 500 at the low end and 3500 at the high end. Comparing the latest data to that range, you could make the argument that we can't get much more oversold than this. Look especially at the red line showing how many stocks are  now in downtrends - it's just about reached the worst level that was hit during last year's significant downturn.

I would submit that stocks are pretty close to a bottom. I base this expectation on two things. First, the charts presented above suggest that, as our indicators reach extreme levels, the sell-off doesn't have much further go. Second, economic growth may be anemic but it is growth nonetheless which, in turn, implies that the current negativity is overdone. The Old  Professor explains this well in [ this post ] at his site A Dash of Insight.

I'd also like to point out that the chart of SPY shown above is based on weekly data and is displayed on a non-logarithmic scale. Note that a trend line can be drawn connecting the lows in 2009 and 2010 and you will see that the latest price is just about on it. Will the trend line hold? Given how oversold the market is and the passable (though not great) economic backdrop, I believe it will (see previous paragraph). I wouldn't be surprised to see a temporary break below it, perhaps a big capitulation day, but I think a rebound is likely. We shall see if I'm right.

This week provides some data that has only a so-so chance of shaking the market out of its doldrums: Retail sales, the Producer Price Index (PPI) and Business Inventories.

So as the next few weeks unfold, let's see if the grip of the bears begins to weaken.