August 25, 2010
The advanced report for Durable Goods for July was released Wednesday and it was pretty dismal.

The fact that the market managed to advance in the face of this report almost makes me think that a rally is in the offing. This is the second instance of bad news leading to gains in stocks. The first was the homebuilders stocks rallying after the horrific existing home sales report on Tuesday. And today we have the overall market gaining even though this report clearly shows one of the green shoots of the economy showing signs of wilting.

In any case, here are some of the highlights of this latest report:
As always, I'll take a closer look at the tech sector. I wish I had better news to report.

I generally give less importance to Shipments since this is a backward looking measure reflecting orders that have been confirmed, manufactured and shipped. It's similar to earnings reports -- it's good to know but the data is in the past and we're more interested in the future. The following chart shows how July shipments look for the overall tech sector: 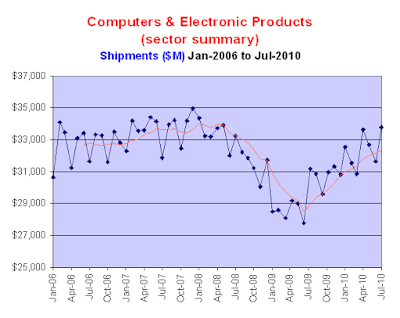 Despite all the bad press on the headline numbers, you can see that the overall Tech sector managed a pretty strong July with shipments hitting a post-recession high (just barely).

Looking a little deeper, we can see that signs of weakness are beginning to appear. Here is the chart for the Computers and Related Products sub-sector: 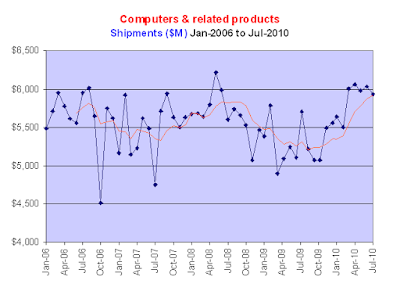 You can see that shipments have stagnated for the last few months and the latest data point has dropped to the 6-month moving average. Not exactly a sign of doom but still worrisome.

Here is where the bad news is lurking. Here's the chart of new orders for the entire tech sector: 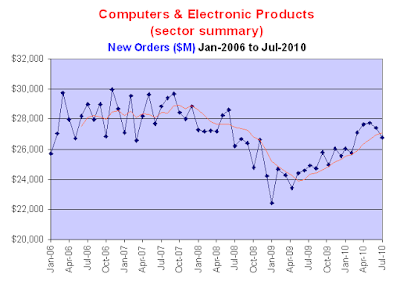 This the second month in a row where new orders have decreased and now this month they slid under the 6-month moving average.

Where things get really dicey is in the Computers and Related Products category: 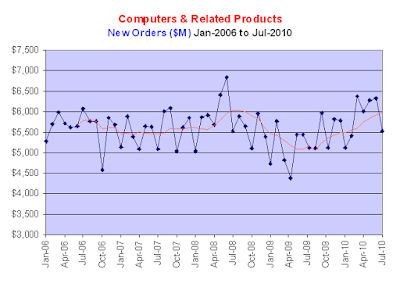 Whereas the decrease in new orders is only 2.4% for the tech sector as a whole, we have a sickening 12.7% drop in the Computers sub-sector. Interestingly, it has been exactly two years since this category endured a drop of this magnitude. What kind of impact might this have on Dell or H-P or even Intel?

We find a bit of good news at the bottom of the barrel. There is a little uptick in the chart of new orders for Communications Equipment: 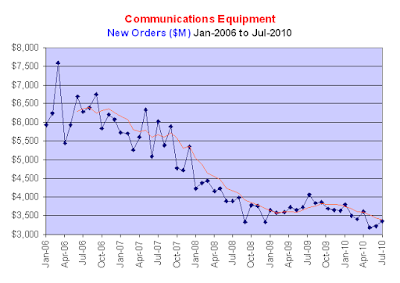 Nevertheless, the uptick doesn't manage to rise above the 6-month moving average which, incidentally, is still heading downward. No wonder Cisco Systems was cautious in their most recent earnings conference call.

The headline numbers surprised economists, coming in significantly weaker than expected. Last month, I looked at the numbers for the tech sector and said that after two months of decreases in shipments, it would be important for July to show a gain. It's a relief that the gain did indeed materialize but, as noted above, the sharp drop in new orders is raising a serious alarm.

If you're a pessimist, you can look at these charts and say tech is dead on arrival. With new orders breaking down so badly, tech is running into that most over-used of words: headwinds.

If you're an optimist, you can look at these charts and say that the data bounces around on both sides of the 6-month moving averages. Tech certainly seems to be taking a breather but it is not a done deal that the sector has thrown in the towel. This is especially true since the summer months tend to be somewhat of a weak seasonal period for tech. So, though the caution flags are certainly waving, full-on bearishness is not yet warranted here.

Still, as I look for a good entry point in a semiconductor ETF (why semis? read the post Analysts can't agree on outlook for semiconductors - what's an investor to do?), this durable goods report gives me pause. Tech remains at a tipping point, perhaps tipping a little further toward weakness than I had expected. Once again, we await next months' numbers. Will it be game over or recovery back on track?

Disclosure: small position in ROM, the ProShares Ultra Technology ETF, no positions in other companies mentioned in this post