June 24, 2009
Today's Durable Goods reports surprised to the upside and helped the stock market regain some of the previous few days losses. The following is our analysis of what the report says about the tech sector.

In April, Semiconductors put together a surprisingly strong month with Shipments showing a 34% gain over March. This month, Semiconductors gave a little back. The following chart reflects an upward adjustment for April and a very modest drop-off in May. Though the trend is still clearly down, the appearance of a bottom is finally coming into view.

This month's outstanding performance belongs to the Computers and Related Products category where New Orders surged 9.4% after dropping mid-single digits in the previous two months. The chart below reflects a downward adjustment in April and the nice move upward in May. This chart shows the clearest evidence of the downward trend finally being broken. 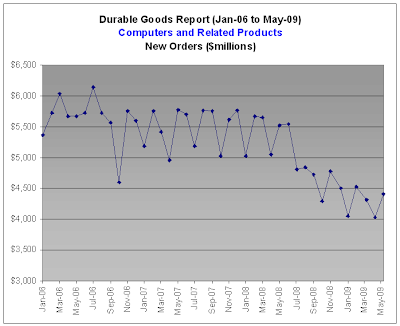 Shipments in this category also seem to be stabilizing and reversing the down-trend. The following chart shows Shipments reaching their nadir back in November 2008 and struggling to maintain a positive direction since then. 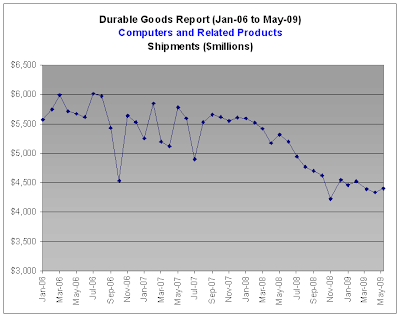 A view of the entire tech sector --

Pulling back from individual sub-categories to look at the high tech manufacturing sector as a whole, the following charts look at the Computers and Electronic Products category. This includes computers and semiconductors, computer peripherals, communications equipment, storage, audio/video, navigation equipment, medical equipment and measurement and control instruments.

The good news in the tech sector as a whole is that New Orders were up 2.2% in May. This is twice the Durable Goods headline number that served as a catalyst to propel the stock market higher today. The following chart shows New Orders hitting their low in January 2009, bouncing back and stabilizing at what is a historically low level. 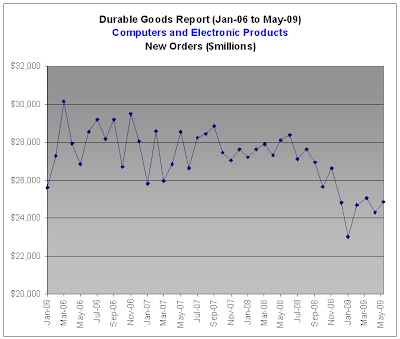 Shipments for the tech sector as a whole, however, are still weak. This next chart shows what could be a bottom but there are really only two data points for bulls to hang their hat on and neither one is especially outstanding. It can be assumed that a large percentage of New Orders may have been canceled and hence never turned into shipments. 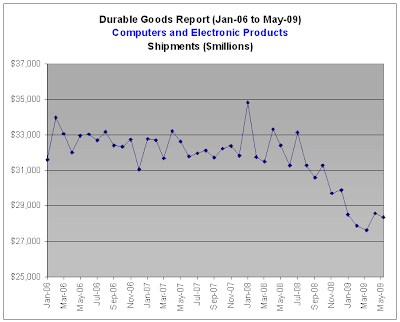 Last month we reviewed a set of similar charts and concluded that tech was making an erratic effort to put in a bottom despite the fact that trends in shipments and new orders appeared to still point downward. This month, the signs are a bit clearer that, indeed, the worst is behind us.

The upswing in New Orders for Computers is certainly good news, especially for companies like Dell and HP. Furthermore, this will have to translate into real shipments in Semiconductors eventually (is Intel on your watch list?). So in this case we should get improvement in two sectors.

The shadow hovering over this sunny scenario, however, is the possibility of order cancellations. Inventories have been dropping for many months now so that risk should be lessening; nevertheless, with today's tightly managed supply chains, an uptick in unemployment or some other macro-economic stumble could pull the rug out from under the sector.

Overall, the picture these charts paint is quite encouraging. If you accept that the worst is now behind us in the tech sector, then it would make sense to be scaling into tech stocks and tech-focused ETFs. Some might argue that the fundamentals do not quite justify current prices but it is clear that growth stories are lurking in this sector and growth is seldom cheap.