Stocks show broad strength - is a breakout in store?

May 17, 2008
In last week's post we saw stocks were weakening but we said "don't throw in the towel yet". This week we reaped the rewards of holding steady. 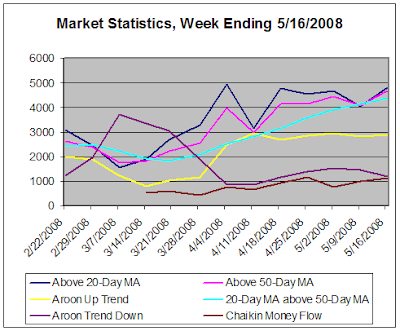 As can be seen, we plot six different indicators. After this past week's market action we now have all of them moving in a direction that indicates continued strength in the market.

All told, between 4000 and 5000 stocks out of about 7200 are trading above important moving averages. There may be some flavor of being over-bought in these numbers but it is undeniable that stocks are exhibiting broad-based strength.

Last week we saw some mixed signals from Aroon and Chaikin Money Flow analysis. This week we see consistency across both types of indicators.

In the chart below we see that the SPDR S&P 500 ETF (SPY) has continued to make good steady progress. As we usually do, we will use SPY as a proxy for the market in general. 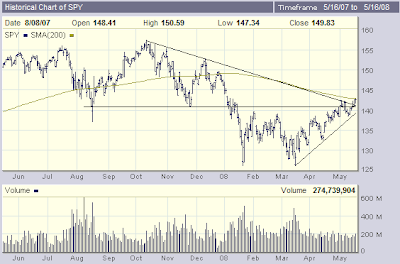 Looking at other technical indicators, we see the following:

SPY has a relatively strong DMI reading. Indeed, 182 of the stocks in the S&P 500 are registering up-trends with decent strength according to our DMI analysis.

In terms of Aroon, fully 306 stocks in the S&P 500 are exhibiting strong up-trends. Unsurprisingly, SPY itself is also showing a strong up-trend according to Aroon.

Many financial bloggers have been complaining that recent rally attempts have not been accompanied by adequate volume. The chart shows that recent up volume has not been as strong as the down volume we saw at the January and March lows. Nevertheless, the analysis presented above demonstrates that a large majority of stocks are participating in this recent up trend. Granted, volume is not through the roof. Still, the broad-based nature of the current advance, the confluence of indicators and fairly decent volume all provide a degree of confidence that this rally has further to go.

For those who watch charts, it can be seen that each of the major averages is currently closing in on its 200-day moving average. If the strength I am detecting continues, we will be seeing each of them break through this important level in the very near future. I would expect that would bring a lot of more buying into the market and maybe even power the averages into positive territory for the first time this year.