Markets rebound - is the danger of new lows over?

May 31, 2008
Markets made solid gains this week though in most cases the gains were not enough to reverse the previous week's losses.

Investors cheered the moderating in oil prices mild though it may have been and market sentiment took a turn for the better. We had another week of economic reports that were at least not horrible. As such, bulls could point to the fact the reports did not paint a picture of an economy in a tailspin. On the other hand, the bears could easily say that the reports did not send an "all clear" signal either. Sentiment this week, then, seemed to be slightly in favor of the bulls.

Some examples: consumer spending in April was flat in real terms. While this does not imply a consumer-led rebound in the economy it also doesn't imply an economy plunging into recession. Durable goods orders surprised investors with a 2.5% gain ex-transportation, implying that the manufacturing sector is still standing despite the woes in the auto and airline industries. First quarter GDP was revised from an anemic 0.6% to 0.9%, still weak but at least the revision was upward. Initial claims came in flat at 372,000, signaling a job market with plenty of room for improvement but with unemployment still well shy of recession levels.

Against this backdrop, investors decided it was safe to bid up stocks. Not aggressively but in an orderly manner with the Dow and the S&P gaining more than 1% on the week and the NASDAQ and the Russell 2000 gaining more than 3%. 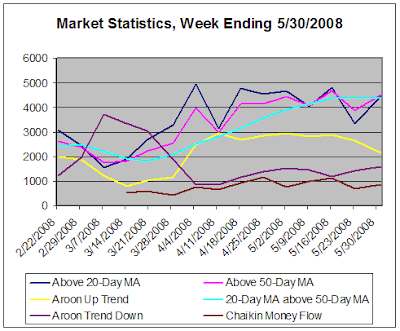 As can be seen, we plot six different indicators. After this past week's market action we now have mixed results with many of them moving in a direction that indicates a rebound in the market and few signaling caution.

We see good news and bad news in the moving averages. The good news is that the number of stocks trading above their 20-day and 50-day moving averages has rebounded strongly from the previous week's big decline, with about 58% of stocks now trading over these levels. Though the rebound was strong, we are still below previous peaks.

This week we see a divergence in signals from Aroon and Chaikin Money Flow analysis.

The Aroon analysis we do shows stocks in strong up-trends or down-trends. The chart shows the number of stocks found to be in strong up-trends has dropped again for the second week in a row, from 2660 down to 2145. The number of stocks determined to be in a strong down-trend has increased for the last two weeks, reaching 1600 this week. Still, it is no where near the level we saw back in early March.

We also plot the results of Chaikin Money Flow analysis. The number of stocks undergoing strong accumulation or buying has made a nice rebound, going from 695 last week to 872 this week. Not shown on the chart is the number of stocks shown to be undergoing strong distribution or selling. This indicator stopped increasing last week, declining very slightly to about 600.

All told, the moving averages are telling a good story of resilience in stocks and reasonably broad-based participation. There is room to advance without stocks appearing to be too oversold. On the other hand, on the chart it looks like we are establishing a series of lower highs in the numbers of stocks trading above the various moving averages and that is worrisome.

We see Aroon indicating that many stocks no longer qualify as being in confirmed strong up-trends. On the other hand, we have Chaikin Money Flow indicating that more stocks are seeing buying pressure. This is consistent with a situation where stocks are recovering from a sell-off. The apparent divergence may actually represent a positive outlook for the markets.

Once again, market statistics seem to support the idea that the path of least resistance is up. We may meander in a trading range for a while but the market seems to be saying that a break to new lows is unlikely.