Stocks drop - are we in a trading range or in free fall?

May 25, 2008
Many analysts and investors have been saying that the market is ready to take a breather. This week it took a really deep breath...

We have seen over the last couple of months that all news, good or bad, was mostly taken in stride. This week, it was a different story.

Things this past week didn't seem any worse than they had been in previous weeks. Economic reports were not particularly bad though the PPI report heightened concern that inflation is creeping though the supply chain. There was a drop in existing home sales, but then we already knew that housing was in trouble. Financials are still in trouble as evidenced by problems reported at Moody's, UBS and AIG but that shouldn't be a surprise either. Airlines and auto makers also contributed to the negative tone but why that was a new factor I don't know.

What really stopped the market in its tracks was the combination of oil and the Fed. Oil turned in another strong performance this week, closing over $131 per barrel. The Fed released minutes of their last meeting and language was quite negative. The Fed implied that further rate cuts were unlikely as the risk of inflation appeared to be equal to the risk to growth. And speaking of growth, the Fed also revised their estimates of GDP downward while increasing their estimates for unemployment and inflation. Some of this was telegraphed by the statement at the time of the last FOMC meeting but the language of the minutes provided insight that served to frighten investors out of stocks.

All told we have seen a real shift in sentiment. Much of what hurt this week's market was not particularly new. Indeed, the news could be categorized as more of the same. Yet this time the market sold off. 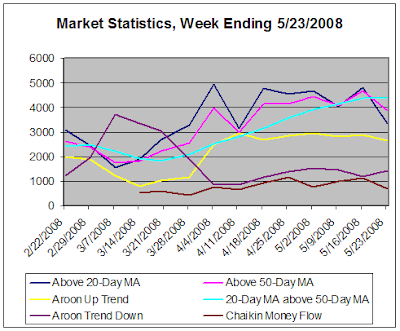 As can be seen, we plot six different indicators. After this past week's market action we now have many of them moving in a direction that indicates weakness in the market.

As we usually do, we will use the SPDR S&P 500 ETF (SPY) as a proxy for the market in general. In the chart below we see that SPY sold off strongly this week and failed at several technical levels. 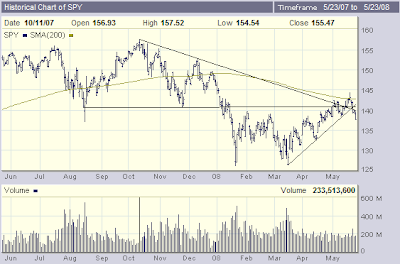 The list of technical tests that failed is long: SPY failed to stay above the 200-day moving average, it dropped below support in the $140 range, it failed to stay above the downward trend line whose high point was established last October and it dropped below the upward trend line whose low point was established in March. Other technical indicators are equally weak: DMI is somewhat bearish, MACD has turned down and SPY is below its 20-day moving average.

That said, there is technical hope. SPY is sitting right at its lower Bollinger band and is still a bit above its 50-day moving average. According to RSI, it is no longer over-bought and Aroon analysis shows that SPY is still in a general up-trend.

The sentiment, fundamentals and technical indicators all argue for further consolidation. I don't believe stocks are in free fall; for now, the operative word is consolidation.

Moving averages show stocks have broken down but will they drop further? Three weeks ago stocks advanced to a point where I didn't think they could keep up the pace of the rally. The post I wrote at the time predicted a trading range. There was a pullback and then a move higher. Now, here we are three weeks later with roughly a 5% pullback from the high. I suspect we could see stocks give up another few percent before the bottom of the range becomes clear.

Fundamentals in a number of industries were not great to begin with even as stocks rose. Some of those industries such as financials, homebuilding, autos and airlines continue their tough times. Other industries like technology and those involved in commodities continue to at least muddle along and provide support to the market.

Negative sentiment prevailed this past week. Positive sentiment could return and drive the market higher again but only if this week's economic reports cooperate. We have a full slate of reports coming up and if the majority turn out to be passable to decent, stocks should hold the bottom of their range and perhaps move up a bit.

As a result we will have to keep an eye on the economic calendar and be ready to duck. We will be seeing consumer confidence, new home sales, durable goods orders, preliminary GDP, initial unemployment claims, crude inventories, personal income and personal spending and Chicago PMI. This should give us a pretty complete read on the state of the economy.

It should be an interesting and possibly very exciting week. And let's hope oil doesn't set any more records again this week.