January 04, 2008
A tough week for stocks closed with a thud Friday. The new year got off to a bad start with a weak ISM Manufacturing report. That was followed up by a weak non-farm payrolls report that caught the market's attention and prevented investors from appreciating the reasonably decent ISM Services report. Note that rising prices were a theme in both ISM reports. This has investors worried that inflation will prevent the Fed from freely doling out rate cuts to save the economy. It was all too much for market participants and they sold stocks with abandon.

As for the TradeRadar model portfolio, we were stopped out of our position in SanDisk (SNDK). But the carnage in the NASDAQ encouraged us to move from neutral on tech to a bearish stance. Accordingly, I initiated a small position in the ProShares UltraShort Technology ETF (REW). Here's the background on this decision.

I have written a couple of posts on how the Durable Goods report over the last couple of months has led me to believe that tech as a broad category was in trouble. We have now seen downgrades of the entire semiconductor sector and bellwether Intel in particular, analysts saying a slowing economy will have a strong negative impact on the previously soaring Software-as-a-Service sector, Cisco's famous "lumpy" demand comment from their last earnings conference call, analysts saying Oracle will do fine but the rest of the software sector is facing slowing growth, signs of contracting IT spending, etc.

It seems the drumbeat for a tech slowdown is growing louder and more insistent. Given that tech was one of the best performing sectors last year, it would not be surprising to see a rotation out of last year's winners and into this year's winners, whoever they might be.

By the way, if you don't think the tech sector is having problems, just look at this list of 52-week lows from 247WallSt.com:

Then there are the charts.

When considering a position in an ultrashort ETF, I always look at the corresponding long ETF and do the technical analysis there first. Looking at the Technology SPDR (XLK), we can see the ETF opening Friday's trade with a gap down. This brought XLK below its 200-day moving average. The chart of XLK is beginning to form a head-and-shoulders top. Looking at a 3-year chart of XLK it appears the first support level is at $24 (another 4% drop). If the ETF reaches that level (and it is not far from it as of today), it will pretty much confirm the head-and-shoulders. If that happens, we could see the ETF fall at least to the next support level around $22 (about 12% below where it closed today). (Support levels are indicated by horizontal black lines in chart below.) As further confirmation, the weekly TradeRadar chart shows a clear SELL signal. 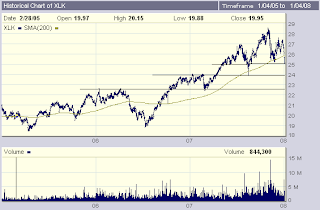 With this kind of chart setup in XLK, the next step is to look at the chart of REW. Here, somewhat surprisingly, the chart pattern is not exactly a mirror image of XLK. There is no head-and-shoulders bottom apparent. What is encouraging for buyers, however, is that today's action displayed a move above the downward trend line and the move was on high volume. In addition, we have a TradeRadar BUY signal that was first flashed back in November 2007 (see second chart below.) 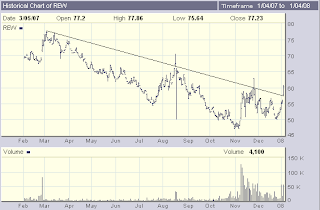 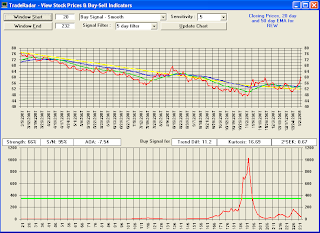 In summary, the charts and the red flags in the fundamental industry backdrop provide sufficient negativity on the tech sector to prompt us to jump into REW.

As for the rest of the TradeRadar portfolio, our bear ETFs had a very good week with the UltraShort S&P 500 ETF (SDS) moving up 8.6% and the UltraShort China ETF (FXP) climbing 9.3%.

Oil hit $100 a barrel this week and our position in DBO benefited. Unfortunately, Friday's profit-taking and the weak jobs report causing demand concerns prompted DBO to give back a bit of the week's gain. Still, the position remains modestly profitable and the gap up from earlier this week has not yet been closed.