Weak demand for oil? Maybe not...

January 07, 2008
Oil fell today on concerns that demand for crude would drop if the economy slows down. And certainly there are fears that, with recession a distinct possibility, that scenario may be playing out right now.

Lower demand should yield lower prices - this is known as elasticity, if I remember my economics classes correctly. With the current oil sector fundamentals as the backdrop, will prices actually fall very much? What have we seen during previous economic slowdowns?

I thought I would investigate by plotting oil imports against the performance of the SPDR S&P 500 ETF (SPY). I will assume that SPY more or less mirrors the performance of the economy. I look at oil imports as a direct proxy for oil demand. The oil numbers exclude what goes into the Strategic Petroleum Reserve. This should shed some light on how demand for oil changes as the economy rises and falls. 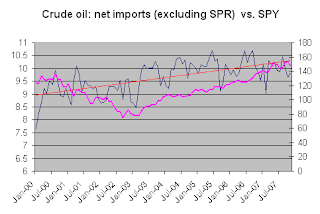 As can be seen in the chart above, oil imports (the dark blue line) vacillated in a range between 8.5 and 10 million barrels per day during the bear market of 2000 to 2003. Note that oil demand didn't really plunge as much as the stock market (the magenta line) did during this period.

Looking at the long term trend of oil imports, the straight-line approximation (the red line on the chart) shows that imports dipped below the trend line during the bear market. It also rose up to the trend line, as well. Interestingly, we are seeing the same thing occurring at the present. Is the rate of demand growth finally slowing? Is it due to record high prices? I'm not sure anyone can answer that question. I certainly can't.

In any case, the conclusion is that oil prices will weaken somewhat as the economy weakens but I wouldn't expect to see the price of a barrel of oil plunge. People will still need to drive their cars and heat their homes. The political situation in many oil-producing nations is still questionable. Industrial use of oil may moderate but there will be no plunge there either unless we fall into a severe recession, which no one is expecting at this point.

Bottom line: if we are seeing the beginning of an economic slowdown, demand for oil will moderate but there is no reason to think that the price of oil will drastically fall. The EIA predicts a continued increase in oil consumption for decades to come and an average price of $84 for 2008. The average price for 2007 was $72 per barrel.

Another point the chart makes is that as the economy hits bottom and begins strengthening, oil imports will begin to quickly rise again. That increased demand will no doubt cause prices to rise again, as well. It would seem that keeping an oil ETF like DBO or USO in your portfolio may be a prudent thing to do.