Range-bound in an ugly market

July 31, 2011
Was it just a couple of weeks ago that the market was shooting upward and all was right with the world? Putting it mildly, it appears we've done a bit of an about-face.

It's regrettable but all those reversals and swing signals we identified recently that were screaming BUY! are now looking a little worse for wear. Before tossing in the towel, though, let's take a look at where we stand from the perspective of the overall stock market's performance. Our moving average and trending analysis charts should provide some useful insights. 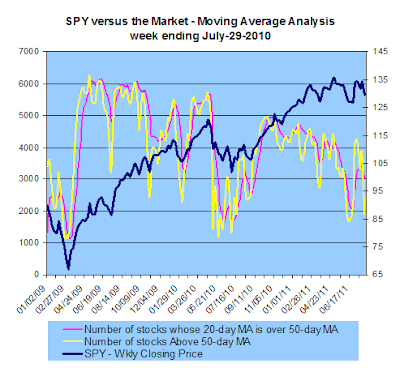 We also see the number of stocks whose 20-day EMA is above the 50-day EMA has started to decline again.

All in all, this chart seems to say that we're back to the bottom of the range we've been in for the last few months. 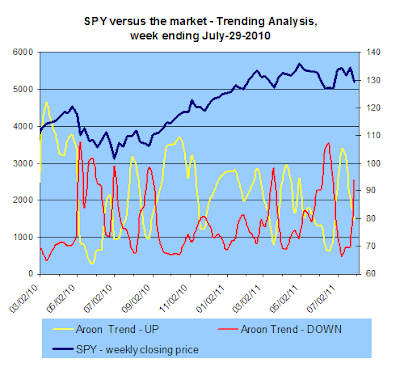 I have shortened the timeline on this chart because it was just getting too messy. Instead of going all the way back to January of 2009, I now start the chart in March 2010. This makes it easier to see the cyclic nature of the trending numbers.

In particular, you can see how the number of stocks in bearish trends (red line) hit a significant peak in mid-June of this year. This was immediately followed by a steep rally that allowed the number of stocks in bullish trends (yellow line) to hit another significant peak in early July. This over-bought condition was quickly remedied as stocks began to sink on economic worries, sovereign debt fears and the debt limit crisis.

As you can see, there is room for stocks to sink still further before we hit the typical over-sold levels from which the next rally will be born. And that should take SPY right back down to the lows established in January, March and June in the $127 range.

For better or worse, the black comedy playing out in Washington, also known as the debt limit negotiations, should come to a head this week, possibly even this weekend. The politicians will either fail to come to agreement or will end up passing a disappointing bill. Either way, it will probably  weigh on the market and we could see stocks fall to the expected lows discussed above.

The concern everyone has is whether stocks will fall right through the bottom of the range. I'm not fond of making outright predictions so let's call this an opinion. I have to think that earnings season wasn't so bad and there are still many voices (including various economists, Fed officials and certain company CEOs) calling for improved economic activity in the second half of the year. My expectation, therefore, is that stocks should bounce. How high? Perhaps you would like to venture an opinion on that...