July 27, 2011
The Durable Goods advanced report for June was just released and we can now see how tech in aggregate is performing. I have been of the opinion that tech is under-valued and this could help determine whether the sector deserves better or whether it tech stocks should remain in the doghouse.

I generally give less importance to Shipments since this is a backward looking measure reflecting orders that have been confirmed, manufactured and shipped. It's similar to earnings reports -- it's good to know but the data is in the past and we're more interested in the future. The following chart shows how June shipments looked for the overall tech sector: 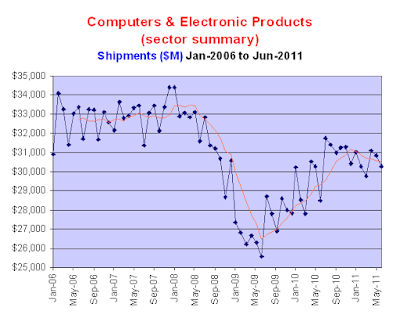 This next chart shows just the sub-category of Computers and related products. 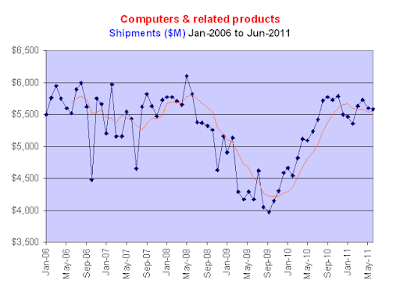 This chart is for the Information Technology Industry. Unfortunately, the numbers for this sector are not broken out in the advance report but I thought it might be interesting to see since I have never presented it before in one of my Durable Goods posts and IT is a part of the tech sector. Anyway, this chart only goes through May. 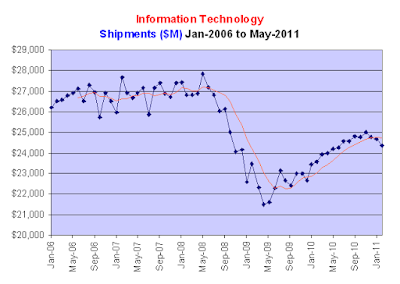 This is the category that gets the most attention as it provides a glimpse of what might unfold in the future. Starting with the sector summary we see that there was actually a small improvement in new orders. 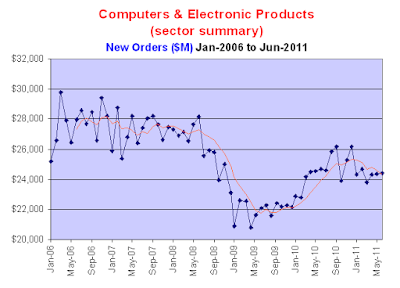 On the other hand, in the Computers and Related Products sub-sector there was a small month-over-month decrease. Note that the moving average has not yet turned down. 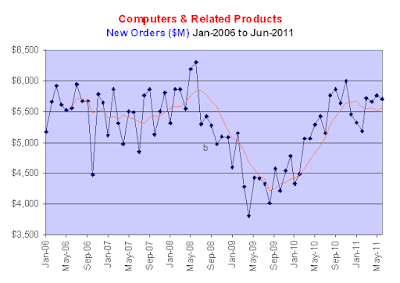 Looking at new orders for IT, there have been a couple of months of improvement. I sure wish we had the numbers for June. 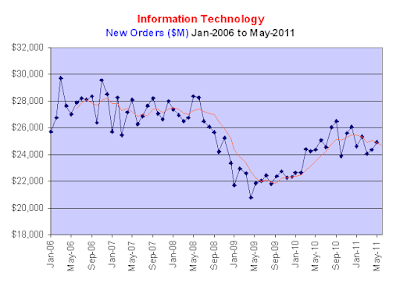 Shipments in the tech sector have indeed been weaker over the last few months. However, it is worth noting that the volatility in the shipment numbers is no greater than when the economy was at its peak. In other words, a clear, strong up-trend would be nice but the current slight down-trend in shipments may very well be only a sign of temporary weakness.

New orders are somewhat stronger than shipments which bodes well for next month. In addition, we are heading into the time of year when tech earnings tend to pick up.

In summary, tech shipments and new orders have been muddling along. While it is clear that there has been some definite weakness, it is also apparent that the bottom isn't falling out either. To me, it supports the thesis that we could soon see a rebound in the tech sector, hopefully by the end of this year. With stocks under pressure again, the buying opportunity might just be improving.