Synnex jumps and keeps on running

October 21, 2010
Today I'd like to feature a stock that appeared in one of the screens at Alert HQ Premium. The screen is titled "Value and Growth Report" and, as the name implies, we look for stocks that embody the best of both worlds: value and growth.

How the screen works --

Using daily and weekly data, we look for stocks that are in up trends or have broken out above their trend lines. Trend lines are constructed using the daily high prices. A stock must rise 5% above the trend line to trigger a BUY signal.

Out of this group of stocks on the move we identify those that have "reasonable value" characteristics according to the following criteria:
We then filter for those stocks with earnings and revenues that have shown improvement both year-over-year and sequentially and whose EBITDA is the same or greater compared to the previous quarter.

Only one stock last week --

Only one stock was identified last week: Synnex Corporation (SNX). This company, which has a billion dollar market cap, provides services in information technology distribution, supply chain management, contract assembly and business process outsourcing in North America, Asia and the U.K. it also owns the largest video game distribution company in the U.S. At the time it was selected for the "Value and Growth Report" (based on the data as October 15), it had the following characteristics:
It's clear this is a solid company, still in the value stock category, that has been overlooked thus far by investors; however, it looks like at least a few investors are starting to catch on. Here's how the chart looks:

Back in September the stock managed to move above the trend line and also above the 50-day moving average. Soon after, the price spiked based on a good earnings report.

Not only was the earnings report good, the forward guidance was much better than expected. Whereas a number of tech companies were predicting some weakness in Q4, Synnex indicated revenues would be stable and that expected EPS would be in the $0.94 to $0.97 range, much higher than the $0.88 that analysts were expecting.

There are a couple of caveats.Value investors typically look for consistency in the financials of the companies in which they are interested. A cash flow analysis of the last four quarters shows the numbers bounce all over the place. Here the chart from Google Finance: 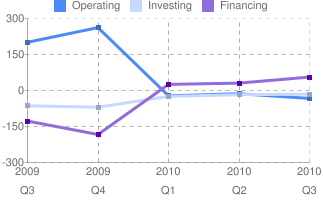 The other issue that might be a warning to value investors is that Return on Assets and Return on Equity are decent but not great. Same situation with Net Profit Margin.

Despite a few shaky numbers in the financials, Synnex is still an interesting value stock with strong growth characteristics. And given that Tuesday and Thursday's "Value and Growth Report" were completely empty, it makes the selection of Synnex all that much more notable.