Weekly review - after a good week, will we get follow-through?

Let's see, what other games can we play? Banks pay fines for sleazy behavior in auction rate securities market, pay billions to wronged investors and take more junk onto their balance sheets. Financial stocks close the week with a gain. Huh?

Ok, so maybe this stuff isn't so simple after all. In actuality, as the market has moved steadily upward we have continued to receive numerous conflicting signals. This week initial claims came in higher than expected, extending the trend of the last few months showing a deteriorating job market. This contributed to lower than expected wage costs when the productivity numbers were released. Speaking of which, productivity increased, something not usually associated with a recessionary economy.

Other conflicting signals can be found thanks to the currency markets. Tech has been a strong sector in the recent rally and exports seem to be the driving factor. With the dollar strengthening this week, it is reasonable to wonder if a stronger dollar will weaken the robust U.S. export machine. Financials have been another strong sector. This week Fannie Mae and Freddie Mac reported huge earnings misses as did AIG. As I mentioned above, auction rate securities are coming home to roost to the tune of billions of dollars. Citi and Merrill have already been tagged for billions and UBS is next in line.

Against this backdrop, we try to get a sense of the market by looking at the data we gather from the Alert HQ process. We use both daily data and weekly data to compile the market statistics discussed below. 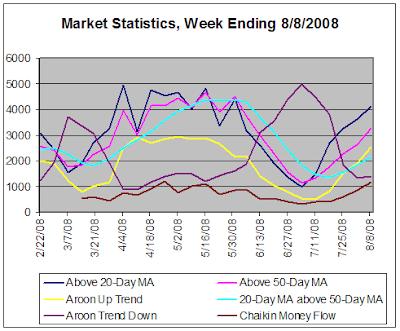 We also plot the results of Chaikin Money Flow analysis. This indicator is moving steadily in a bullish direction. The number of stocks undergoing strong accumulation or buying continues to increase at the fastest rate we have seen since we began accumulating this data.

We also present market statistics based on weekly data in the chart below: 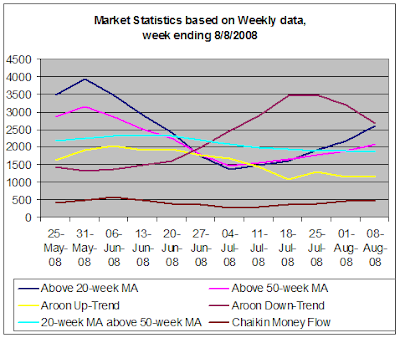 The weekly data naturally has similarities to the daily data. As can be expected there is a certain lag in all the curves presented in this chart. What is disconcerting, however, is that some of the curves are flattening out instead of moving up. Indeed, we saw a confirmation of this in the Alert HQ list of weekly SELL signals which increased in number over the previous week.

Market sentiment is undeniably positive despite a mixed environment tossing various positive and negative nuggets of financial and economic news at investors.

Many stocks have turned in earnings considerably lower on a year-over-year basis. Nevertheless, the fact that they beat lowered expectations has been greeted with investor enthusiasm. The continued decline in commodity prices is welcomed by investors even as the accepted reason for the decline is a weakening global economy that is reducing demand.

Lots of questions and lots of moving averages coming into play. Absent a major negative economic report or financial bomb, the path of least resistance seems to be up.

The coming week brings retail sales, CPI, weekly numbers for initial claims and crude inventories, the New York Empire State Index, industrial production and consumer sentiment. Plenty of opportunities to move the market. Will you get the follow-through you're looking for?