August 12, 2008
Monday I bought the ProShares Ultra Short Financial ETF (SKF). I have bought and sold this ETF several times in the past year or so.

Here are my reasons why I think now is a good time to own SKF:

Financial stocks are emerging from earnings season. The somewhat misplaced enthusiasm over the way many of the financials exceeded drastically lowered expectations is beginning to fade. In terms of year-over-year results, these stocks, pretty much across the board, stunk up the place. We are now seeing some analyst downgrades, even for the likes of Goldman Sachs.

The winds of adversity are blowing in the direction of the financials again. Auction Rate Securities are negatively impacting a range of financial institutions. They are engaged in buying back illiquid securities and are facing potential fines as the New York Attorney General generally makes life miserable for them. It appears that bonds backed by consumer loans and credit card debt are becoming increasingly shaky. Credit requirements are tightening according to surveys of loan officers so lending is slowing. Merger and buyout activity has slowed drastically, curbing yet another potential earnings stream.

Housing has not improved. Indeed, we have probably seen the peak for 2008. It is already August and as fall approaches, the residential real estate market will go into hibernation until spring of 2009. This won't help the mortgages or mortgage-backed securities still on the balance sheets of many financials.

The SEC ban on naked shorting of financial stocks is set to expire on Wednesday.

SKF had fallen to support at about the $110 range (see the horizontal line on the chart below) and was trading at its 200-day moving average. On Monday the ETF dropped nearly to $106 but recovered and closed over $110. With the fundamental picture for financials deteriorating once again, it appears safe to buy SKF again. As I have written in prior posts, though, it doesn't pay to chase the ultra ETFs. Having fallen from its July peak of over $200 down to $110, Monday looked like it was presenting a pretty good entry point so I picked up the ETF at $111 and change. 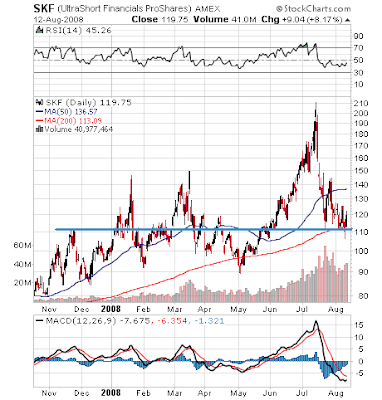 Closing today at $119.75, SKF has at least started out on the right foot. If the financials wilt as I expect, it may not be too late to jump on this trade.