Lending tightest since 1990 - can the Fed make a difference?

November 20, 2007
The focus was on the Fed today after they released minutes of the last FOMC meeting and provided their economic forecast for the next several years.

Their expectation for slowing growth has Wall Street holding its breath waiting for more rate cuts. Yet the minutes reveal that the decision to lower rates at the last meeting was a "close call".

It is worth considering what power the Fed has to resolve current market problems with rates alone.

As everyone knows, one the primary problems facing the economy is the "credit crunch." The term "credit crunch" appears in so many articles and blog posts that it sometimes seems to be in danger of losing its impact on investors. That is, until the next financial blow-up that is the result of credit not being easily available or loans or debt offerings being rebuffed. Just look at some of today's examples. It was reported that the $4 billion sale of loans stemming from Cerberus Capital Management's acquisition of Chrysler has been postponed indefinitely, leaving banks holding the bag, I mean, loans. And we also have the spectacle of Freddie Mac scrambling for cash and suggesting a dividend cut might be in order.

Can manipulation of rates alone solve a "credit crunch"? Merrill Lynch has put together some data that shows things aren't that simple.

Merrill periodically publishes their Research Investment Committee Report, known as the RIC Report. This week's report covers a lot of ground but one small part of it provides some thought provoking information related to credit and the Fed.

The following chart shows Merrill's Credit Availability Diffusion Indicator which tallies all of the Fed's loan officer surveys to determine if the banking system is being generous or stingy in its lending practices, and whether lending is getting more or less generous over time (higher scores reflect tighter standards). 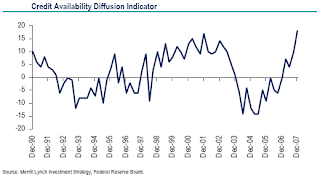 To quote the report:

"The current reading of the indicator shows that credit conditions are the tightest in the history of the data (since 1990). That degree of tightness suggests that credit creation is likely to decrease, which is a definitive hindrance to economic growth."
The chart removes any doubt about the severity of the "credit crunch" we are experiencing. Note that rates have been cut twice and the indicator hasn't even paused in its steep upward trajectory. This implies that, though the Fed might cut again at its next meeting, it could be a while before we see an easing in credit markets and a reduction in market volatility.

Not to forget one of the other sore spots in today's markets: housing. Tightened lending on the jumbo and sub-prime ends of the housing spectrum will contribute to lengthening the downturn in this industry and make it that much harder to absorb the excess inventory. This is not the kind of news homebuilders want to hear.

Fed futures are already pricing in a 92% chance that the Fed will cut again at their December meeting. Inflation and dollar weakness issues aside, don't be surprised if it doesn't do much to help resolve the "credit crunch."