Industrial Production trending down -- are stocks next?

November 16, 2007
Industrial Production numbers for October were released today by the Federal Reserve. It was a somewhat dismal report with decreases across all categories compared to the previous month.

I wanted to see how the numbers were trending so I plotted the Manufacturing sector (in red in the chart below) versus SPY, the SPDR S&P 500 ETF (in brown in the chart). 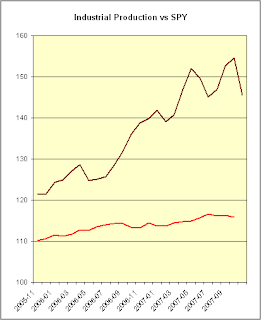 As can be seen, Manufacturing hit its peak in July of 2007 at a reading of 116.6; SPY, on the other hand, was at that time on its way down to the August lows. Since then stocks have recovered, made new highs and are currently in another downtrend.

To do a few comparisons, during the time period covered by the chart above, Manufacturing has gained 5.16% since November 2005. The S&P has gained 19.7% even after the decline shown in the last segment of the chart.

In 2005, manufacturing comprised 12.2% of GDP, roughly the same percentage contributed to the nation's output by the government. Interestingly, the real estate-rental-leasing sector also contributes a similar percentage. Finance and retail make up the next largest segments at about 7% to 8% each.

So, adding it up, we have about 40% of GDP made up of manufacturing, real estate, financial and retail. These are precisely the market sectors that are under the most pressure these days. With manufacturing prone to multi-year cycles, there is the potential that we are only in the beginning of a downtrend there. There is a good chance that with respect to real estate and financials the worst is still to come. Recent earnings warnings from retailers don't do much to bolster confidence in that sector either.

All that being said, it is quite possible to draw the conclusion that stocks will come down from here. Manufacturing is just one more point of confirmation.