This stock has the classic chart pattern we like to see in the TradeRadar software. It has been steadily dropping since November 2006 from a high of over $70 until it hit a low around $35 during the summer.

In early August Rogers jumped from $35 into the $40's and stabilized. By August 15 the stock had flashed the TradeRadar BUY signal. We are a couple of months late in recognizing Rogers as a buy but there may still be gains to be made.

Here is the chart from the TradeRadar software: 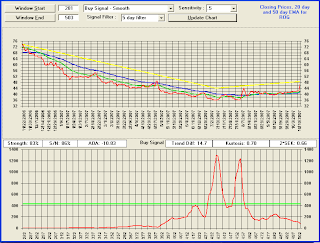 So what caused the jump today? Here is the quote from the 8-K: "Rogers Corporation (NYSE:ROG) today announced revised guidance for its fiscal third quarter ended September 30, 2007. Rogers now projects third quarter net sales to be between $109 and $110 million compared to the August 6, 2007 guidance of $94 to $97 million. Non-GAAP earnings for the third quarter, excluding any restructuring adjustments, are now projected to be $0.44 to $0.48 per diluted share versus the previous guidance of $0.32 to $0.35 per diluted share." That's an improvement in earnings of 30%. Not bad!

Can the momentum continue? The answer is maybe. Once again, from the 8-K: "Sales in the Custom Electrical Components segment are approximately 25% above our previous forecast. The volume of orders from one large cell phone program that is nearing end of life was much higher than expected. Additionally, the High Performance Foams ("HPF") segment achieved all time record sales for the quarter. The record HPF sales were driven by market share gains in portable handheld devices." So one segment beat forecasts but the contract driving the growth is about to end. The other segment driving growth, however, seems to running on all cylinders. The company will provide guidance for the fourth quarter when it formally reports earnings in early November.

In any case, the TradeRadar BUY signal is exhibiting good strength and the trend lines clearly support the reversal indication. For now, the stock looks like its ready to run.