October 23, 2007
Having watched the Chinese stock market soar to what looks like bubble levels, I have been reluctant to look at any Chinese stocks as serious investments. I do watch a few though and I thought that it might be time to highlight one that is beginning to display accelerated growth.

China Automotive Systems (CAAS) has been drooping most of the year from a high of about $13 in January to a low of $6 in August. Still, CAAS came through with a big 2nd quarter earnings report and eventually the stock began moving up. In early October it managed to close over $9 but has been slipping since then to just over $8. This could be as cheap as the stock will get.

China has managed to chalk up year-on-year growth of 25.9% in car sales for the first half of 2007, according to the China Association of Automobile Manufacturers (CAAM).

Based in Hubei Province, People's Republic of China, China Automotive Systems, Inc. is a leading supplier of power steering components and systems to the Chinese automotive industry, operating through seven Sino-foreign joint ventures. The company offers a full range of steering system parts for passenger automobiles and commercial vehicles.

Its customer base is comprised of leading Chinese auto manufacturers such as China FAW Group, Corp., Donfeng Auto Group Co., Ltd., Brilliance China Automotive Holdings Ltd. (who has partnered with BMW), Beiqi Foton Motor Co., Ltd. and Chery Automobile Co., Ltd. In addition, in May 2007, the Company announced that its subsidiary, Jingzhou Henglong Automotive Parts Co., entered into an agreement with FAW Volkswagen to supply high-quality power steering products. The power steering products are being installed in Volkswagen's Jetta vehicles manufactured in China. With this supply agreement, China Automotive Systems has entered into Volkswagen's global sourcing system and become a tier 1 supplier to one of the largest auto makers in China.

Earnings reported in early August 2007 indicated CAAS had a standout 2nd quarter. Profit more than tripled on strong product sales. Net income reached $2.5 million, or 10 cents per share, compared with $751,636, or 3 cents per share, in the previous year. Revenue for the quarter rose 47 percent to $36.3 million versus $24.8 million in the prior year. Management is justifiably proud that revenue increased by double digits yet selling expenses were up only 6.8%. It has a P/E of 33.03 (ttm), much more reasonable than many other Chinese "rocket stocks". See the graph below for trends over the last four quarters. And by the way, the company has no long-term debt.

The TradeRadar BUY signal was flashed on the daily chart as shown below: 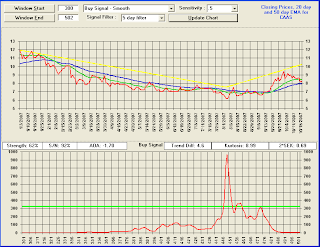 CAAS is in the middle of the red-hot Chinese automotive market. Previously, most vehicles were owned by commercial businesses. Now that individual private citizens, with their increasing salaries and more sophisticated tastes, are able to buy cars, the automotive industry in China is exhibiting very strong growth. China Automotive grew faster than the market in the second quarter based on the new business that came through Volkswagen. Even if growth merely matches the market, we should still see double digit growth for a number of quarters to come.

We may be a little late in recommending the stock but it is our opinion that there is still ample upside. With the third quarter in the books as of the end of September, we are looking for the company to put up good numbers again when they report in the next few weeks.

Disclosure: as of today, author is long CAAS

Smart Scan Chart Analysis continues positive longer term. Look for this market to remain firm. Strong Uptrend with money management stops. A triangle indicates the presence of a very strong trend that is being driven by strong forces and insiders.

Based on a pre-defined weighted trend formula for chart analysis, CAAS scored +90 on a scale from -100 (strong downtrend) to +100 (strong uptrend):