I have focused first of all on earnings growth; ie, the change in quarterly earnings on a year-over-year basis. The change was converted into a percentage growth calculation in order to compare growth rates across multiple quarters. For 4Q-2011 (results for 4th quarter 2011 as reported during 1st quarter 2012) the numbers are as follows:

To widen our net a bit, I then looked at stocks who did not have accelerating growth but whose earnings growth year-over-year was at least still positive. There were 671 companies that were able to clear this hurdle or almost 12% of those stocks we follow.

I am ignoring whether these companies missed the whisper number or fell short of analyst expectations. The fact is that 37% of stocks managed to register positive earnings and most of them even registered accelerating earnings.

If the following table I show how the numbers have looked over the past three quarters in order to gain some perspective on this most recent quarter:


What jumps out here is that the numbers are fairly consistent and actually pretty good.

Here are a couple of charts that show the results graphically. Companies that are showing Earnings Acceleration are denoted by the purple bars. 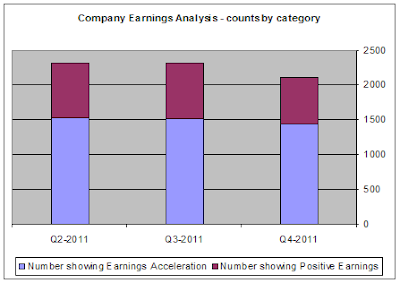 Here is the same data represented as percentages: 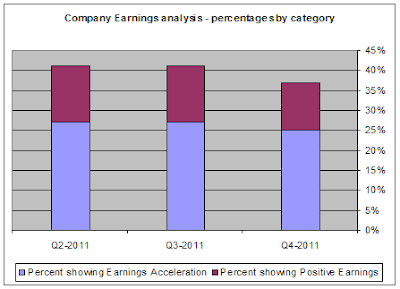 Keep in mind that I did not include in this analysis those companies who had positive earnings in a particular quarter but where those earnings were less than what was registered in the prior year’s quarter. There are very roughly around 2000 companies in Q2 and Q3 and almost 1800 companies in Q4 that fell into this category.

First of all, it can be seen that Q4’s results were not as strong as the previous two quarters. If one were trying to establish a trend based on these three quarters data points I guess it could be said that the trend suggests a slight weakening. On the other hand, it cannot be said that Q4 was particularly bad, only slightly less good than those earlier quarters. Keep in mind that all results over these three quarters have been with just a few percentage points.

The results also seem to support the bulls who firmly believe the economy is on the mend. There are significant numbers of companies whose earnings are accelerating and that suggests economic growth, not a return to recession.

Disclosure: I have no positions in any stocks mentioned, and no plans to initiate any positions within the next 72 hours.