At the beginning of August SPY crossed below its 200-day moving average and made brutal downward move. Since that time, the ETF and many other indices and their associated ETFs have been tracing out what is know as a "bear flag" on their daily charts. This week SPY and the rest broke below the bottom line of the flag pattern. Here's what it looks like:

The blue lines show the flag. The black oval shows where we ended the week. Despite a rally on Friday, SPY is clearly on bearish side of this pattern. Furthermore, a sizable gap was opened up on the way down. In addition, the bottom line of the flag pattern, formerly support, now becomes resistance. The expectation now that the breakdown has occurred is that SPY could fall another 10 to 15 points.

With SPY about to test the low for 2011, we should see what some of our Trade-Radar market measures are telling us. 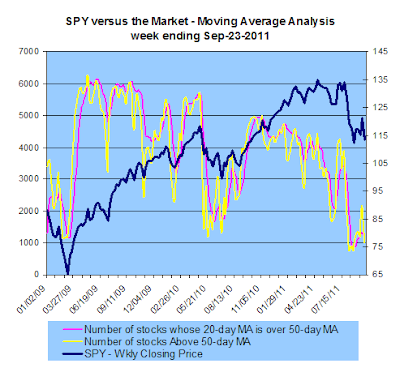 The number of stocks above their 50-day EMA (yellow line) has dropped into the low range originally established in the beginning of August. The number of stocks whose 20-day EMA is above their 50-day EMA (magenta line) is drooping once more and the yellow line has dropped below it again. These are not bullish developments. At best, it looks like we continue to be stuck in a multi-week bottoming phase. After hitting real bearish extremes (red line at a high, yellow line at a low) in early August stocks swung positive but breadth has not been great. Note how the yellow line, representing stocks in an up-trend, never hit much of a peak while the red line, representing stocks in down trends did actually reach a fairly low level. This indicates that many stocks stopped declining but their recoveries were not strong enough to actually qualify as a strong up-trend.

Now we see large numbers of stocks resuming their down-trends but we are not at an extreme yet. You know what that means, right? More room for stocks to fall.

All in all, I can't imagine stocks suddenly rallying from here unless there are dramatic moves to support the markets either from Europe or Washington or both.

The charts presented here suggest weakness will be with us for a while. Plan accordingly...