Yes, the Tech Sector is Undervalued

May 19, 2011
Here's why I think the Tech sector is currently undervalued: 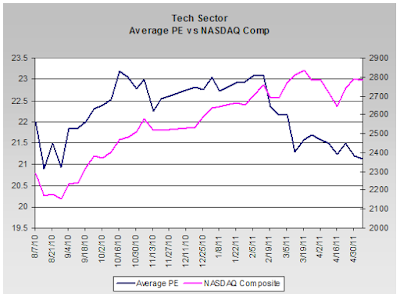 This chart shows the Average PE for all profitable tech stocks with a market cap of at least $300 million. The Average PE is compared to the NASDAQ Composite.

The interesting thing is that even thought the NASDAQ Composite has moved up over the last few quarters as depicted in the chart, the average PE peaked after Q4 2010 earnings were reported and has declined ever since.

It's true I've tossed out some of the really high PE outliers but even when they are included, the chart has the same shape as that shown above.

This suggests that Tech stocks today are anything but over-valued.

Further supporting this thesis is that the second half of the year is often strong for Tech and many analysts are predicting that this year will be no different.

Bottom line: tech stocks are undervalued and the coming seasonality puts the wind at their backs. Tech is likely a Buy right now.


Disclosure: in the tech sector I am long TECD and USD