BRICs are so yesterday -- get ready for CIVETS 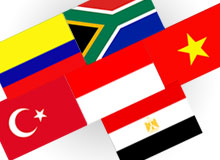 Certain investment themes become so well known that they merit their own acronym. One of those is the BRICs - shorthand for the popular emerging market countries Brazil, Russia, India and China.

There are some investors and analysts, however, who are always looking for the next big thing. As Brazil, China and India become victims of their own success and begin to raise interest rates in order to cool their over-heated, inflation-prone economies, many investors are looking elsewhere to deploy their emerging market portfolio allocations.

So prepare yourself for a new acronym: CIVETS

For those people who are well versed in zoology, you may know that a civet is a nocturnal, cat-like, mostly arboreal mammal native to the tropics of Africa and Asia. But for our purposes, CIVETS stands for a group of countries that some analysts feel represent the next wave of emerging markets. They are: Colombia, Indonesia, Vietnam, Egypt, Turkey and South Africa.

The CIVETS owe their acronym to the Economist Intelligence Unit (EIU), which forecasts the countries will grow at an annual rate of 4.5% during the next 20 years. In contrast, developed countries are expected to grow at an annual rate of only 1.8%. The CIVET countries were selected because they have "diverse economies, fast-growing populations, relatively stable political environments and the potential to produce outsized returns in the future".

Knowledge@Wharton/Fleishman-Hillard did a survey on the CIVETS among potential investors. The main concern among those that were interviewed was political stability. In essence, many of these countries could more accurately be termed "frontier markets" which implies much more uncertainty than the "emerging market" category has.

Where the BRIC countries have an emerging middle class and increasing numbers of highly educated citizens, the CIVETS countries, though they have made great strides, still have large segments of society that are poor and not so well educated. The BRIC countries all have huge multi-national companies that carry their respective flags beyond local borders. The CIVETS countries have been able to field companies that are strong regionally but are not quite the equals of some of the flagship companies of the BRICs.

The EIU acknowledges that the CIVETS do not have the economic power to "reshape the global economic order" as much as the BRICs and their combined GDP will only amount to one-fifth the size of the G7 nations' combined GDP by 2030. Instead, the CIVETS are second-tier emerging markets that have relatively sophisticated financial systems and do not face runaway inflation, massive current-account deficits or public debt.

Here is what the Wharton faculty says about these countries:

Colombia: Following years of high-profile drug wars, Colombia remains a small market, but has always been a dynamic economy with some key industries, including fresh flowers, oil and coffee.

Indonesia: The largest of the CIVETS, Indonesia has a huge, sprawling population and has already benefited from investment by the U.S., China and Japan, but political and social stability is never certain.

Vietnam: A low-cost alternative to China for manufacturing, Vietnam has ambitious plans to grow its economy despite a Communist government.

Egypt: Although Egypt has a well-educated, prosperous population in its Nile Valley cities, much of the country remains poor and the country has a high level of debt (80% of GDP). The political future beyond the rule of President Hosni Mubarek is cloudy, and the country could face religious turmoil.

Turkey: Not a destination for manufacturing because costs are already high, Turkey remains a promising regional center which has benefited from relative stability and ties to the West in a volatile part of the world. Membership in the European Union would be a plus, experts note, but religious turmoil might hurt its economic prospects.

South Africa: Although it faces problems with unemployment and HIV/AIDS, South Africa has strong companies, a well-developed business infrastructure and can serve as a gateway to southern Africa.

Here's what the market says about a couple of these countries:

After the political upheaval in Tunisia, the Egyptian stocks plunged. The concern over political stability can still be the Achilles heel for these countries.

The fundamental investment thesis for Turkey remains relatively intact but the country's stock index has worked its way lower over the last couple of months as growth, though still quite good, has not been quite as robust as expected. This could be a buying opportunity for patient investors.

As an Asian economy, perceptions of Indonesia's stock market can be colored by the happenings in China. Here again, the last two months have shown extended weakness. Since Indonesia is the largest of the CIVETS countries, it has the potential to outperform the other countries in terms of GDP and its ability to give rise to companies that can show strength beyond its borders. Another buying opportunity, perhaps?

That's right. You may never have thought of investing in one of these countries before but someone else has. There are one or two ETFs for each of the CIVETS countries:
With the typical emerging market plays weakening lately and expected to be going into an inflation-fighting phase, it may be the turn for the CIVETS to shine.