December 15, 2010
One of the stocks that popped up on Alert HQ earlier this week is a tech stock that looks a lot like a value stock. I'm talking about Intevac (IVAC).

Intevac is a small cap stock that has broken out in a big way. It's up over 50% from its most recent low in mid-September. The question is, however, is it now over-priced?

First, let's take a look at the weekly chart: 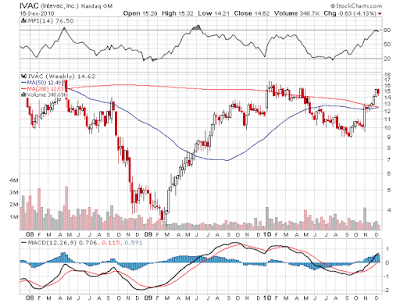 You can see that it's gone from around $9 to almost $15 which is a sizable move. A pull-back seems almost inevitable. Yet, after that potential pull-back runs its course, there could be room for further gains. Here's why:

The basic scenario is that this stock currently looks like a value stock. If it is perceived to be a growth stock, then there is opportunity for its multiple to increase.

Let's take a look at the financials and establish its value qualifications. Here are some valuation characteristics:
So the company is still quite reasonably priced thus far. Is there a growth pattern appearing that will allow the stock price to continue it's climb? Here is the chart from Google Finance: 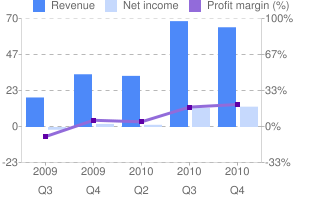 There has been a big jump in both revenue and earnings from Q2 to Q3 but a slowdown in growth from Q3 to Q4. If the company can just resume modest growth from current levels, there should be room for stock price appreciation. What factors might provide investors some confidence that this might actually happen?

Management effectiveness seems to be pretty good. Return on Assets and Return on Equity are both in double digits which suggests that management is providing good returns for shareholders.

What about the company's product mix and industry outlook? Intevac is a major player in the manufacturing of magnetic media for disk drives. Over 60% of the world’s hard disk output is produced on Intevac systems. The companies solar processing segment is involved in providing manufacturing and inspection platforms for thin film solar cells. The photonics segment is involved in sensors, specialized cameras, night vision, material identification (including biologic and explosives detection).

The good news is that in the age of pervasive computing, PCs are not the only products that use disk drives. Everything from iPods to massive enterprise data center disk storage systems need magnetic media. As the volume of data continues to grow nearly exponentially, in the cloud, in the data center and in your hand-held devices, it would seem that Intevac is in a good position as the major supplier of disk manufacturing systems.

Similarly, sensors of all kinds are proliferating so the company's photonics segments has a shot at doing well in the niches servicing the law enforcement, pharmaceutical, industrial inspection and laboratory markets.

Thin film solar cells are considered to be the latest, leading edge technology in the photovoltaic industry. It is promising that Intevac is involved in thin film manufacturing and inspection systems at this point in time and that perhaps the company can leverage this into a leading position.

All in all, the company is priced reasonably and still has the potential to follow through on its recent breakout. It's worth it for investors to keep an eye on Intevac and be ready jump in if the company begins another leg up.

Disclosure: no positions at time of writing