September 09, 2010
Intel's stock price has been circling the toilet lately but I'm not so sure the company deserves the scorn of investors. In actuality, the outlook is not nearly so dismal.

First, let's start by looking back a couple of months. At that time Intel announced blow-out earnings and margins at the high end of their historical range. The stock popped briefly and then began a steady decline. Here is the chart: 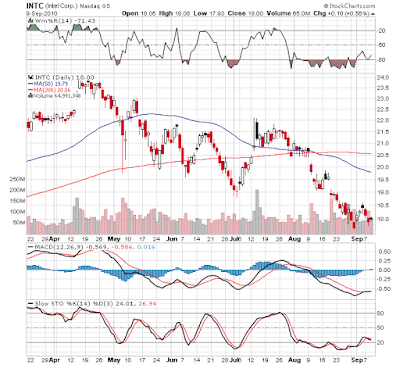 The nail in the coffin was when Intel announced that they were reducing their guidance for the third quarter of 2010. The stock dropped like a rock and took much of the semiconductor sector down with it.

Why should Intel merit your attention? Here are four reasons:
These four reasons make Intel an attractive candidate. Perhaps the near term holds some uncertainty but the company is positioning itself for growth. A year from now, this may have turned out to have been an excellent buying opportunity for Intel investors.